‘’Critical thinking is deciding rationally what to or what not to believe.”

We are a selective girls’ grammar school in a reasonably affluent area. Year 7s are a new addition to the school, having first joined us in 2013. Religion and Philosophy is a popular subject, with a 92% achieving A*or A at GCSE and 100% achieving A* to B. A level results also have a high percentage of A and A* successes. I previously co-ordinated RE, Citizenship and PSHE at a Middle School in the Purbecks and this is now my second year at PGS, teaching mainly KS3 and KS4 students.

I am interested in exploring the attitudes and judgements of our KS3 students, so chose some activities which I hoped would develop their curiosity and ability to formulate challenging questions. My aim is to encourage our students to develop transferable skills which can benefit perspectives and judgements in other subject areas and facilitate a deeper understanding of current issues.

From initial lessons with Year 7 and 8 pupils, it became apparent that there were pupils in each class who had a good basic grasp of some global issues, for example Fairtrade, whereas others had very limited understanding. There were a comparatively small number who said they had discussions about current issues at home and some views expressed in classroom debates were naive, simplistic or misinformed. Some pupils were quick to make assumptions based on stereotypes, whilst others had started to challenge preconceived ideas. I thought it important that, in order to expand critical thinking skills and promote independent thought, I could encourage the students to think more laterally in our Religion and Philosophy lessons, incorporating ideas from my Philosophy for Children (P4C) training in order to develop curiosity and judgement, whilst challenging their assumptions.

I used the following activities to measure their initial reactions to two different stimuli:-

Word association, based on words or phrases they associate with ‘Poverty’ and then ‘Wealth.’ This was a starter activity; on A3 paper, with stimuli words in the middle, students worked in pairs, adding all words they thought were associated with each key idea. We later recorded the combined results and analysed the frequency of the words, creating a visual ‘Wordle’ to show results. We repeated this activity after our P4C sessions and compared the breadth and quality of responses. We found that the second attempt yielded more complex ideas and included searching questions, rather than just isolated words. 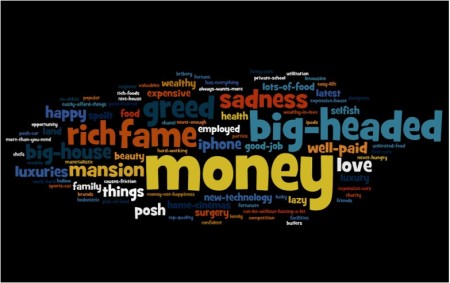 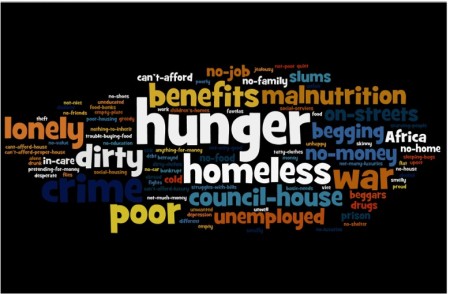 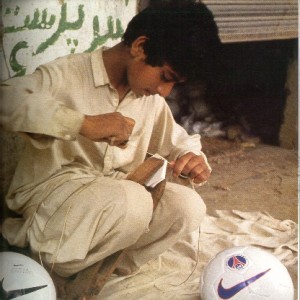 Abdul lives in Pakistan. He works 12 hour a day, 6 days a week, stitching footballs for Nike.

I asked children to do a role play in pairs, with one child being a British child asking Abdul questions and the other being Abdul describing his life. After 5 minutes ask children to swap roles. Ideally the data would be randomly collected on video as unobtrusively as possible.

Mahmoud’s Story. Students watched a short film about Mahmoud, who was constantly being asked to run errands for friends and family, which he did willingly, but he craved the chance to escape, alone, on to the rooftop to paint. The idyllic view he painted was far removed from the hectic, cluttered reality in front of him.  The students devised various questions to ask the character about his life. They then did role play in pairs, with one student interviewing the other, who took on Mahmoud’s character and this was filmed. Then the students swapped roles. The interviewers used the group questions and devised new questions of their own. We transcribed the conversations from the films and analysed and coded the questions and responses to show a) empathy, b) stereotyping, c) questions unlikely to be expected to be asked to a white child. We also compared these results to those from a local year 4 group from a school in a similar area and compared progress.

We later repeated the ‘Wealth and Poverty’ and Mahmoud activities with classes of year 8 and 9 students who had already had more experience of P4C. The difference in response was marked, with more evidence of questioning and global awareness. Year 9 pupils showed increased empathy, asking a student role-playing Mahmoud’s character, ‘Are you happy with your life?’ Another probed further, adding, ‘’…and if not, why not?’’ whilst another wondered, ‘’what environment would you like to live in?’’ A different girl asked, ‘’How much time do you dedicate to yourself?’’ whilst another, remembering her introduction to utilitarianism, asked. ‘’Do you expect anything in return?’’ The younger pupils mind-maps and hot-seating, by contrast, showed pupils offering more simplistic ideas, questions and answers.

We can also compared results by examining the Wordles devised from mind-maps and from transcriptions of Year 7 and 8 paired discussions on what they thought was meant by ‘wealth’ and ‘poverty .‘ We have included here the words most used, both in their mind-maps and in their ensuing discussions on the issues. Again, there appears to be more depth and variety of thought in the Year 8 students who have already had previous exposure to philosophical questioning techniques.

In comparing the reactions of a variety of age groups, some of whom already had experience of P4C, we could see the development of critical thinking skills and the benefit of incorporating philosophy into the curriculum. Students who had already been encouraged to ask questions and see beyond the obvious were providing observations that showed increased depth and enhanced reasoning. Many of the Year 7 pupils, who had as yet no experience of P4C techniques, were initially making more stereotypical assumptions about the concepts of Wealth and Poverty – and, indeed, about Mahmoud’s life. The more experience the students had in asking philosophical questions, the less it seemed they were likely to be swayed by stereotypical views. These attributes can only be of benefit to their future understanding of other subjects, of global issues and of humanitarian, political and economic dilemmas.

P4C has definitely helped to develop critical thinking skills and has challenged the students. On reflection, it would have been more effective to have taken photographs of the year 9 work, instead of filming it, in order to make it easier to incorporate examples into this case study. For a true ‘control’ it would have been useful to have compared similar age-groups, such as year 7s who had already studied P4C ideas at their previous school, compared with those who had not. Unfortunately none of our new year 7s last year had previously had experience of P4C.