Pessimism turned to hope when witnesses felt they had the power to act. Thus, the children who were most confident that climate change need not overwhelm them were those where schools had decided to replace unfocussed fear by factual information and practical strategies for energy reduction and sustainability.

Ours is a rural primary school working towards Eco School status. We trialled the activity How much water can you save? with pupils in Year 5, and fitted it into work we were doing on sustainability in Science.

Initially, pupils were unsure about their choices for each statement in the activity. They tended to focus on statements that they perceived to be about water wastage, rather than water conservation. So, they focussed on statements like You use a dishwasher every day even though it isn’t full and You wash your clothes even if they aren’t dirty. These were easier for them to decide about: it is clear that they are expecting a negative response.

Pupils struggled more with statements about smaller actions, for example, they found it hard to decide whether it is better to use a jug to collect dripping tap water, or to use bath water to water plants.

At first, I felt that the activity might be too complicated, because of this confusion, but I persevered with the teaching around water.

We used Centre for Alternative Technology’s activity Where’s the Impact which is a series of picture cards, representing different stages in the life of an object, piece of food or resource. We used it to look at the impact of a bottle of water, starting with the oil that is used to make the plastic, and working all the way through to the choices you have with the bottle at the end of its life such as recycling or landfill. It was interesting to note that at this stage, it didn’t occur to the pupils that there were any options other than landfill or recycling. They didn’t think of reusing the bottle or of not buying the bottle in the first place. 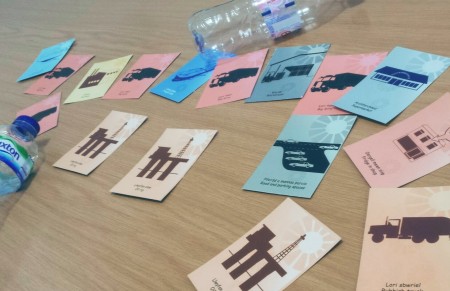 Pupils found it easy to guess each stage, and it didn’t matter if we didn’t know all the answers. We used this as a starting point for a series of lessons about some of the parts of the lifecycle through their Science and Geography work. We looked at the water cycle, at the water table, at droughts and flooding and touched on the impact of climate change on access to water.

They also took away aspects of the map we had created to research at home. They came back with numbers relating to the amount of people buying bottled water each year in the UK, and how many people drive to the supermarket.

They considered all of these have an impact.

We then revisited the end of the bottle’s life, and thought about other options, instead of just recycling. They started to think of ideas for reusing bottles and we drew up plans to build a plastic bottle greenhouse in the school grounds.

We decided to provide pupils with proper reusable bottles for water in the classroom.

As a final audit activity, we decided to actually make the snakes and ladders game. Pupils were much more aware of the small actions adding up to make an impact, and found it much easier to decide which was good and bad. They also suggested lots more ideas for the board game.

We had to change the scoring a little bit, to include three and four steps forward and back, so that the snakes and ladders were longer.

Pupils really showed a significant change in critical thinking: they were much more aware of things they could do to make a difference, other than just recycling; and the work was really easy to deliver through in the Science and Geography curriculum. 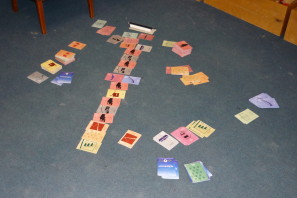 I would have like to return to the Where’s the Impact activity and revisit the end of the bottle’s life, thinking about reuse and about alternatives to buying water, but we couldn’t have the cards (which took up several tables) out for the whole time.

In the future, I’d create this impact map on the wall, so it could stay and we could keep looking at it. When we discovered actions we could take, the pupils could have removed whole lines of cards to see that change is possible and that they can be part of it as consumers.

With more time, we could have spent much longer on each stage: this activity could easily take a whole term, studying each section bit by bit. It would have been great to share the outcomes with parents, so that pupils could start to encourage them to think about their choices too, and feel that, as children, they had some power and impact.