A working group of Early Years teachers was established to explore ways to measure attitudes linked to the global citizenship key concepts in Foundation Stage children. The group consisted of teachers from three infant schools: teachers 1 and 2 from fairly affluent, mainly white British areas; teacher 3 from an area of extreme deprivation; and a representative of the local Development Education Centre (DEC). One of the teachers developed the audit activity Fair or Unfair? to measure attitudes towards social justice, equity and conflict resolution, based on the deliberately unfair allocation of resources.

In a Numeracy lesson with her Year 1 (age 5 – 6) the class teacher (Teacher 1) handed out some equipment to only half the class, stating that she didn’t want to give the equipment to everyone. Pupils instantly disputed this, stating that it wasn’t fair and that everyone should be allowed to learn. They referred to the right to learn and how the classroom should be fair for all.

In a Reception class (age 4 – 5) the class teacher (Teacher 2) asked groups of four children at the sand tray to build a sand castle with just one bucket.  Each time one took the bucket, the others just made sandcastles with their hands and the child with the bucket passed it to a neighbour as soon as they had finished.  Asked how they felt about not having the bucket, all but one child said that they did not mind as they knew they would get a turn.  Only one child retained the bucket for the whole of the session once he had made his sandcastle. Their teacher felt the children already had an understanding of rights and focused on each other’s right to play, being prepared to share, and not picking up on the idea of fair/unfair.

In one of the Philosophy for Children (P4C) sessions with a mixed age class of 4 – 7 year olds, pupils were told they were going to be working on questions and distributed question marks on paper, and scissors to cut them out. Two random children (who just happened to be two of the youngest children in the class) were not given scissors. Teacher 3 together with the local DEC member facilitated the session responding to the children’s contributions, but not leading or eliciting specific responses in any way.

They found that although pupils could explain what the problem was and discuss feelings, none used the terms fair or unfair; none offered their scissors to the children who were without when they had finished, and no one suggested they should and none of the older children was prepared to offer their scissors to the two younger ones who didn’t have them. Only later, when most children had finished cutting, did one pupil hand one of the children his scissors; another child then followed suit. 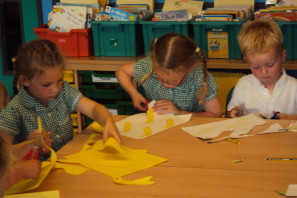 Teacher 2 trialled this activity with her Reception class. As with the sand tray, pupils did not see a problem because they all said they would wait and share. One child even took it upon herself to direct the scissors to the children without, once a child had cut out their question mark. It seemed clear that these children were demonstrating the impact of teaching about respecting one another’s rights. Extension work with this class might be to explore the concept of fairness in the context of rights. 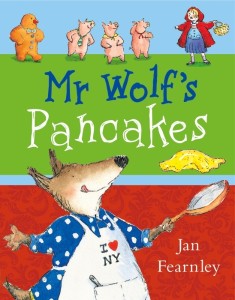 In Teacher 3’s school a similar activity was undertaken, where sweets were shared out unfairly. In this session children were helped to explore the concept of fairness. This was followed by a session using Mr Wolf’s Pancakes as a stimulus, where Mr Wolf’s neighbours won’t help him make pancakes.

The children were read the story in advance of the session. They were asked to summarise the story, then asked how Mr Wolf’s neighbours behaved towards him:

As the children’s teacher had not been there at the previous session when sweets were distributed unequally, they were asked to describe to the teacher what happened with the sweet distribution. The majority of children thought it was unfair to start with but fair once everyone had two sweets each. I then said that I had quite a lot of sweets that were left over and asked if that was that fair. Some thought it was unfair but one child said I should have more because I was bigger. I then asked if the bigger children should have had more.

They were asked what fairness was about and most who spoke thought it was about everyone having the same. They were then asked to think about going out to play and either just the boys being allowed to play football or everybody having to play football.

They were then put into groups of four and asked to act out the story with every 4th child designated as wolf. In one group one child refused to take part because he wanted to be the wolf.

Once back in the circle the children were asked if the way of choosing the wolves was fair or unfair. Most thought it was fair as then there would be no arguments. We then discussed the group where one child wanted to be the wolf and wouldn’t take part. Would it have been fair to let him be the wolf in that group? One child thought it would have been fairest if they had taken turns at being the wolf. One child thought that some children might not have wanted to be the wolf.

They were then asked what fairness was about. Most children who spoke thought it was about things being shared equally, but one child said it was all about agreeing.

Children were then helped to extend their understanding of fairness to being fair to people by meeting their needs. We used situations that have arisen in the classroom as our stimulus: someone who has hidden pairs of shoes; a pupil who cut another’s hair; tidying up and whether it is fair to expect others to tidy our mess.  These discussions have led on to wider issues around whether it is fair to be told off when you have done something wrong. Pupils discussed whether it is fair to give presents to people. The children thought it was fair as long as they got a present back, until we were talking about birthdays and they then decided that we didn’t always need a present back.

As this progresses, the children are getting better at staying on the topic, although the Reception children are still relating it more to their own experience than to the wider issues (which I would have expected).  All children are using the terms fair/unfair and building a good understanding of them.  I plan to relate fair/unfair to some of the wider issues around food and resource distribution with the older children later on in the term.