Ours is an urban Primary school with a very diverse pupil body. We wanted a project with a real-world context to further develop pupils’ understanding of multiple perspectives or stories on any given topic, place or person. The designed cross-curriculum project was announced to parents on our website in the following way: Our whole school project will engage the children in the multiple stories of Brazil, building upon their understanding of the Millennium Development Goals. We will learn about Brazil’s geography, poverty and development issues and celebrate Brazilian culture through carnival.

All year groups undertook auditing activities to get a glimpse of their initial knowledge and perceptions. The activities were repeated at the end of the project, to evaluate the effectiveness of the teaching and learning. A shift in children’s knowledge, understanding, skills and values was to be facilitated by a visible learning approach. We assumed the children in Year groups 4, 5 and 6 (age 8–11) would demonstrate high levels of awareness.

We decided to do the activity Brazil or the UK with Year 5, but using pictures of Brazil, and none of the UK. The ten pictures were chosen to be representative of a cross-section of daily life. The children were required to justify their decisions and comments.

Four of the pictures were said to be the UK, based on the idea of Brazil as less economically developed than the UK. Pupils thought the supermarket picture was taken in the UK because of range of products and size: They are less fortunate than us. They reckoned roads and traffic lights looked familiar as well. The Father Christmas picture was thought to be from the UK because We celebrate it, they don’t.

Only one group considered the possibility of the built-up high-rises being in Brazil.

Those pictures identified as Brazil were based on climate, language and the style of some buildings. Here is some of the reasoning behind pupils’ decisions:

All year groups addressed the global dimension in their planning as well as any relevant Millennium Development Goal and/or Rights Respecting Schools Award dimensions. We set the aim of children understanding the term Poverty, beginning with a definition activity to appreciate the difference between absolute and relative poverty. Then we moved on to relate it to income, services, inequality and rights, linking to Millennium Development Goal 1 (Eradicate extreme poverty and hunger) and understanding the challenges that could remain post 2015.

Year 4 I am Somebody

The Year 4 focus was to find out about life as a street child in Brazil. The class also incorporated an element of advocacy, considering different futures and solutions. The pupils read children’s accounts and used drama to imagine life on the streets. They went on to create an art installation depicting conditions on the street and concluded by advocating an International Day for Street Children.

To bring their project to life they worked with an artist using brown paper and cardboard as a base; they painted this and then added charcoal illustrations.

The class presented a Google employee with their Google Doodles designed to raise awareness of the campaign for an internationally recognised Day for Street Children. He was very impressed with their advocacy skills and deep understanding of the issues surrounding the campaign.

The students also lobbied parents at a whole school event and demonstrated their knowledge and understanding to such good effect they gathered 162 signatures on the official e-petition.

We celebrated the children’s learning about Brazil through a carnival communicating their knowledge to parents and carers, covering the issues of social justice and equality, eradication of poverty and sustainable development. A Children’s Task Force was formed to manage the project and the whole school event and to blog about their experiences on the school website.

The children’s artwork was inspired by the French artist called JR, who paid tribute to the heroines of Brazilian favelas by pasting huge photos of their faces and eyes over the houses. 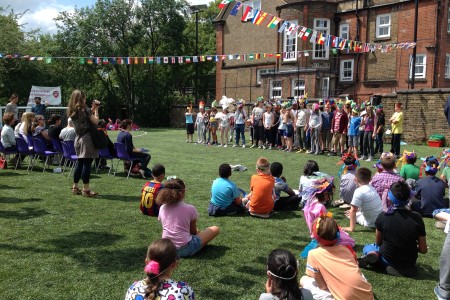 We used a slightly different set of pictures this time to avoid children repeating their previous answers.

All were correctly identified as Brazil with a wider range of justifications. Factors now regarded as indicative of Brazil:

Move pupils’ thinking on from focussing on only favelas and rainforests to exploring industry, technology, television, diversity of landscapes, imports and exports, fashion, contemporary music, history, colonialism, present and past human rights activists, environmental campaigns and so on.