I trialled the activity at a Secondary Vocational school in the Czech Republic. The school offers four-year courses in a variety of topics. To trial the activity, I chose a class of diploma degree students. As a part of this project we included three measuring activities in the curriculum. The activities had common goals, and based on these activities we prepared a study program focused on the working conditions of plantation labourers, Fairtrade, and corporate social responsibility.

Before the first class I placed a number of brand names on the blackboard, including a few locally known brands. At the beginning of the class I asked the students which of the brands I put up on the board do they prefer and why? The students discussed their choices and reasoning in pairs, and wrote them down.

During the initial audit of the activity it became clear that none of the 16 students who participated (seven boys and nine girls) knew the brand names BP and Divine, which is why we, in the end, left them out of the evaluation.

It was clear from the initial audit of the activity that the students primarily followed their personal experience in making decisions about the brands. They often considered whether they have access to the products, for example whether they are affordable or are easy to get in the Czech Republic.

In the next phase, students evaluated the reliability of the brand. In this case they also primarily relied on their personal experiences saying, for example I have some of the products of the brand, and I’m happy with them. Very often they evaluated the brand based simply on whether they liked the products or not. There were also some emotional judgments made, such as The best in the whole wide world is…

During the audit I noticed that students were aware of some of the advertising slogans, for example Tchibo doesn’t sell only coffee. Some of them also knew about the new Fair Trade coffee offered by Tchibo.

I think that the results of the initial audit reflected to a large extent the living situation of the individual students. The price of the products offered by the different brands is a key factor for them for various reasons.

After completing the measuring activities each pair selected one of the brands discussed, and in the teaching interlude they found out more detailed information about it. They then presented the information to the rest of the class. The presentation contained not only a list of the products offered by the brand, but also a list of the countries where the company makes their products and the kind of conditions the employees work in. We were also interested in the quality of the products. In addition to a discussion about the companies, we showed students the film The Story of Stuff and Black Gold.

A student who participated in a similar class in the past was so interested in the topic that she was trying to inform her classmates about the conditions in which coffee, tea, cocoa beans or bananas are grown. She even set up a “Fairtrade Breakfast” in the city of Děčín. She used this opportunity to discuss this topic with her peers.

The goal of the teaching interlude was to tell students about the way business currently works, but also to make them aware of the pressure the companies create on the consumer, in order to make him constantly purchase new products. With this, we were trying to show the connections between consumerism and its roots and consequences and to strengthen the students’ belief in the fact that a consumer can create real change with the choices she makes.

During the final audit, the class consisted of 12 students – seven boys and five girls. I sorted the students’ responses according to gender. I assumed that the most significant differences in answers would correspond to the difference in gender. But this hypothesis did not prove to be correct.

The biggest positive change between the initial and final audits was the more substantiated way the students argued in support of their opinions. If we look at the numbers of answers there were no significant changes. At the same time, students’ comments show that during the second evaluation they made their decisions based on more diverse factors than during the first audit. While subjective assessment and personal preferences played a part in the decision-making, students also considered quality, effect on health, environment, and the conditions of production such as the use of cheap labour or child labour.

During the final audit, just as during the initial one, the students placed an emphasis on whether the brand and its products were readily available in the Czech Republic and whether they were affordable. From this perspective, the most problematic brands according to the students were Divine, Primark, Apple and Nestle. Nike was deemed expensive, but affordable.

Unlike in the initial audit, when students most often chose brands on the basis of subjective preferences, during the final one they also considered, among other things, the negative influence of the products on health. For example while discussing Coca-Cola comments included There is so much gross stuff in it that I don’t drink it and It ruins your teeth. Nestlé on the other hand produced conflicting views Their products are healthy, or They have too much sugar, it’s unhealthy. The use of cheap labour and child labour during manufacturing (Nike) and the influence of production on the environment and water pollution (British Petroleum) were also mentioned in the second audit.

I believe that it is very hard to change the students’ views where they are based on their personal experiences with new information about how the products are made, in what kind of conditions the workers find themselves, how the company behaves in the country where their products are produced, and how their manufacturing influences the local environment. In the future, I would like to be able to open my students’ eyes and show them what is actually hiding behind the different brands, to realize what they are actually supporting by buying the products of a certain brand.

The students will, of course, be free to choose their consumer behaviour, but I feel what is important is that they will understand the consequences of their actions.

Brands like McDonald’s are an interesting challenge for me. The students of course like their products, and they have similar quality and taste all around the world. I would like to shake up their thinking by asking the question: Is it an advantage, or does this unifying approach carry a risk with it? 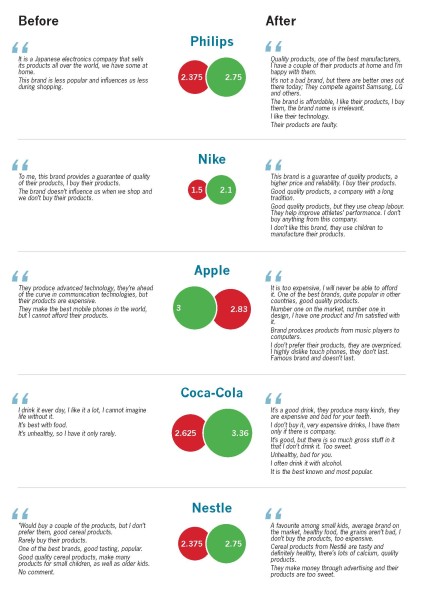 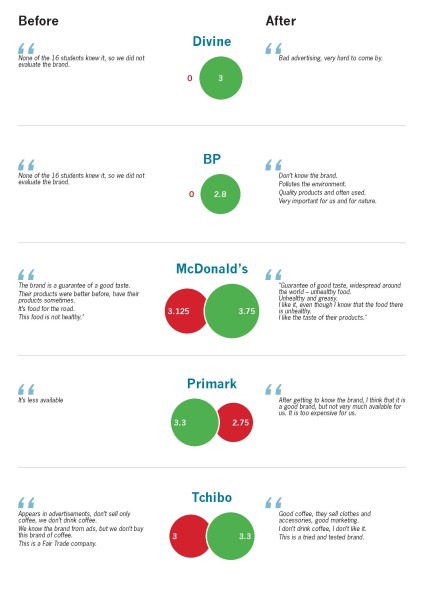