This work took place at our linked Infant and Junior Schools a few miles outside Reading. We have a two-form entry, which means we have two classes of around 30 pupils in each year group. The catchment area is relatively affluent and mainly white.

These were repeated with years 2, 3 and 4 a year later, and we compared the results.

We were particularly interested in the activity How can I make the world a better place? as we wanted to find out whether pupils were aware of ways they might take action in the world around them.

These were the most common responses in the baseline audit

We felt this showed the pupils had a good awareness of some of the ways they can act sustainably, and this reflects some of the schools’ priorities. However we were disappointed that they had so few ideas about social justice, locally and globally. So we looked for opportunities throughout the year to raise pupils’ awareness of injustice and provide them with opportunities to make a difference to people’s lives, beyond (but not excluding) raising money for charities.

We set some key Global Citizenship targets for both the Infants and Junior schools, including Learning that we have rights and responsibilities, and Understanding that I can help to make the world a better place, along with other targets about diversity. We wanted to empower pupils, equip them with the skills they might need to take part in their communities, and to believe that they were able to contribute to positive change, even for global issues such as poverty or access to education.

We had a particular focus on fair trade during Fairtrade Fortnight, exploring the impact fair trade can have, and that it is more than just consuming paying a bit more, it is a partnership agreement. It raised interesting discussions about justice.

We also and participated in the Send My Friend to School campaign. We organized assemblies for both Junior and Infant schools. Every class, including Foundation Stage (pupils aged 4-5) took part, writing messages to be sent to David Cameron about the importance of education. The Junior school talked about Malala Yousafzai and her bravery at standing up for her right to an education.

We invited the local press to visit the school and invited our MP, Theresa May, to visit so that we could present her with our paper chains and our messages. She attended an assembly at which a representative from each year group interviewed her about the Send My Friend to School campaign. They asked her what she was going to do with their messages, what she thought about the problem of children not receiving primary education, and what she was going to do about the problem. Theresa May explained the Government’s stance on the issue and talked about the importance of putting pressure on leaders all around the world to enable change to take place. She told the children that their voice matters. 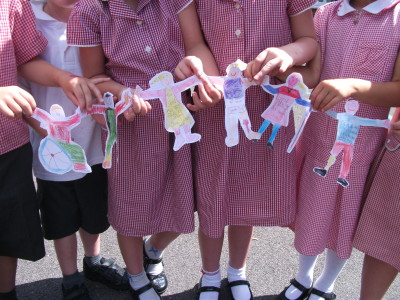 Pupils with their work for Send My Friend To School campaign 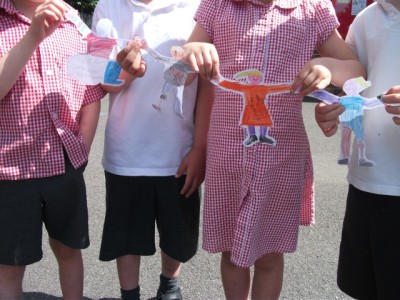 The pupils then fed back the outcome of their interview to the Head Teacher, who asked the pupils, even those in Year 1, to provide statistics and data about inequality and the impact of the campaign, which they could all do.

The pupils were enthused by this extremely positive experience, and this was mirrored by feedback from parents as well.

We then conducted a follow up audit, asking the same questions again, and found a significant change in their responses for the Global Social Justice category.

These were the most common responses in the follow-up audit

The biggest difference which really stood out for us was the increase in pupils’ awareness of homelessness and poverty, and their references to the right to water, healthcare and education, especially in Years 2 and 4. This shows a real change in their attitude towards poverty, as an issue of injustice, not just a lack of money.

We noted that in the baseline audit the greatest number of responses in each year group was in the local sustainability category. A year later that was still true for Year 3, but for Year 2 and 4 the greatest number was in the global social justice category – a quite dramatic change, and one which we believe confirms we are moving in the right direction.