This activity took place with Year 2 (age 6-7) pupils at this urban, multi-ethnic Primary school of 630 pupils. Having completed Global Citizenship training with another Year 2 teacher from the same school, we decided to work together to include the water-themed lesson and experiment on water filtration, as this fitted with our  topic this half-term on water and the science plans on investigations.

I started the lesson by explaining the learning objectives of understanding the importance of clean water, being aware of the Millennium Development Goals (MDGs) on water and beginning to know how they can help by using water wisely.

Target 7C: “Halve, by 2015, the proportion of the population without sustainable access to safe drinking water and basic sanitation”

The children then split into small mixed-ability groups to look at various photographs, discussed these and decided whether the pictures were from Africa or the UK. They then returned to the carpet and shared their ideas and their reasoning. I then sorted them into the correct countries, and challenged any assumptions. 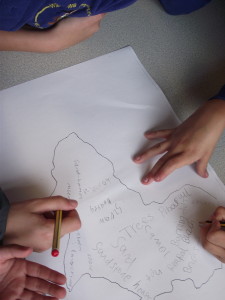 The audit activity of sorting the photos revealed the classic stereotyping assumptions that all of Africa is hot, dry and sandy, suffering from droughts and poverty. The photos I had used included pictures of drought, rain, running water from taps, floods, fountain statues and standpipes from both Africa and the UK this year. Most pupils assumed the droughts were in Africa and the rain, floods and fountains were in the UK. However a few children noticed palm trees in the background and thought that maybe it could be Africa; likewise they spotted hotels they thought didn’t look like hotels you would find in the UK. They were very surprised to find out that both UK and countries in Africa could suffer from droughts or floods.

The activity challenged their assumptions, with the children realising that whilst some parts of Africa suffer from poverty, there are also many similarities in the towns and cities. They went on to discuss that in an affluent country, such as the UK, there are still people without homes or enough money to buy food. They commented that they had seen people living on the streets in the local town.

The children were then shown a bottle of dirty water, and various equipment needed (2l bottles cut in half, netting, linen, sponge, kitchen towel, sand, gravel) to complete an investigation on filtration. When they had made their model in their groups, we tested them out to see what was the best way to clean water.

There was further discussion time to talk about what worked well or not and why. As none of the children had used all the materials, I showed them what happened if they were used in the correct order, and reminded them that although the water looked clean, it could still carry bacteria and be dangerous to drink.

We then looked at photos from the Oxfam website of children living in rural parts of Africa drinking and washing in dirty water, which led to further discussion and in turn to the MDG concerning water. We looked at filtration systems used both in the UK and Africa, which were helping to achieve the MDG goal.

Finally we considered how pupils could impact the environment by using water wisely. They talked with their learning partners and shared their ideas with the whole class. As a plenary we discussed what would happen if we didn’t use water wisely, and the use of standpipes.

Implications for the pupils’ own lives

During the discussion about using water wisely the children came up with great ideas about how they could do, or are already doing, things that would impact on environmental water issues. The children talked about turning off the tap whilst cleaning their teeth, having a shower rather than a bath and one child explained that her mum has a four minute timer for having a shower! They were also able to talk about using the bath water to water the garden and saving rainwater in water butts.

Having seen the pictures of children without clean water, pupils thought about sending water to them. I explained that this would not be cost effective but that money could be sent to charities like Oxfam to help provide filtration tanks to clean the water. They were extremely surprised to find out that water in this country has to be paid for – they thought it was free! Pupils were also extremely surprised that droughts have happened in this country and that standpipes have been used. They thought that the photo of standpipes in the 1970’s was of children filling their buckets up at a beach.

The lesson took much longer than expected: although planned for one session the lesson actually took the whole morning owing to the amount of discussion. This was mainly due to the fact that Global Learning is not currently embedded in the children’s learning; we therefore had to spend a long time on the photo activity and on challenging their assumptions. However it was extremely satisfying to hear the children broadening their perception of Africa. One child commented I used to be frightened by Africa because I thought it was all about poor people, disease and dying. Now I realise that only happens in parts of Africa and some parts are just like here! What more justification could there be for including global awareness and learning!

Global learning in the future

Completing the Global Citizenship training with my local global learning centre and delivering this lesson has shown me how important it is to challenge children’s assumptions. So many negative views are shown of Africa in the media that this is their only understanding of it. Whilst it is important that they are aware of the poverty and suffering, it is just as important for them to understand the similarities with their own country to redress the imbalance in their thinking.

I’m now much more aware of the importance of including global learning in a topic and water is an ideal opportunity. I hope to include global learning in various areas of the curriculum when planning for next year, using many of the activities covered by the course, so that global learning becomes more embedded.