I decided to use this activity with my Year 4 (age 8 – 9) class following several incidents of fighting in the playground, which were causing concern across our school community.

I chose the following cards and put them on the whiteboard, ensuring pupils understood terms like negotiate fully.

I explained we wouldn’t discuss the words yet, because first I wanted them each to be honest and tell me what they thought about the different options.

For each one we asked the question Is this the best way to resolve a conflict? and took a hands-up vote as to which heading it should be placed under, Yes, No or Maybe. I noted the number of raised hands for each.

As part of their English work I decided to use Peggy Moss’s Say Something to discuss bullying in school, and other books to help us talk about conflicts in a wider context: The Librarian of Basra, Jeanette Winter; Azzi in between, Sarah Garland and A Child’s Garden, Michael Foreman. 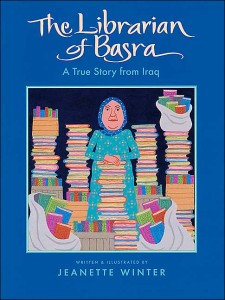 © Jeanette Winter, The Librarian of Basra: A True Story from Iraq used by permissions of Houghton Mifflin Harcourt. 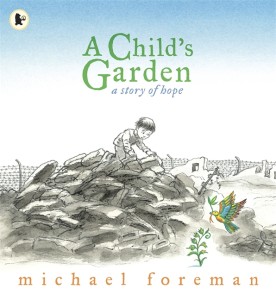 Over the following term we read and discussed the selected books and a variety of cartoons and images. We explored bullying in circle time and about how it would make us feel if we were bully, victim or by-stander. We considered what we could do and what we thought we would do in different circumstances. We widened discussions to talk about current conflicts in Europe and beyond and what we could do in response as individuals and as a community. We touched on bravery, heroism, standing up for our own or other people’s rights, and how it might feel to be sent overseas to fight/keep the peace. I linked this with Refugee Week and we talked about the best ways to respond to someone from an area of conflict who joins the school.

We held a Philosophy for Children enquiry using the story Max Velthuijs’ Frog and the Stranger and the children settled on the question Why are people afraid of someone they don’t know? which led to interesting discussions.

Results after repeating the activity

I was encouraged by the thoughtful way most pupils responded and, although there wasn’t a huge change between the baseline and repeated results, I felt that the children had thought more deeply about the consequences of conflict and were less inclined to think apportioning blame was a solution. There was much discussion about who they might talk to when trying to sort out a conflict, and as a result I now plan to find ways to explore and introduce peer mediation.