Our Primary school has 76 children and five teachers. The children are predominantly from white middle-class backgrounds. Water was selected as our theme for our international work and activities were conducted over a term and in partnership with one school in Zambia and one in India. Some of the work was conducted whilst a teacher from Zambia was visiting.

My assumptions before starting the project were that most children in the area take water and access to it for granted and are unaware of their embedded water usage. I also presumed that they do little to limit their water wastage and have a limited understanding about global issues relating to water.

Children were given pictures of water usage taken from RISC’s resource bank and asked to sort them into countries: UK, India or Zambia.

Outcomes: This activity was conducted in a Year 5/6 class and a year 3/4 class (ages 7-11). The Year 5/6 pupils had had greater exposure to Global Citizenship education and were quick to question assumptions whereas the Year 3/4 children made stereotypical assumptions.

The pupils were asked to draw a story map (a technique in which pupils use a graphic map to help with structure when they are writing a story). Their story needed to show how they use water in a typical day.

Outcomes: There was some variation in the detail the children incorporated. Most, however, only included obvious activities, such as brushing teeth and washing hands. None thought in more detail about more discrete embedded uses. There was very little variation between year groups.

Outcomes: In this activity the Year 5/6 pupils proved more aware than the Year 3/4 class. Most quickly identified that plastic is bad and thus reasoned that the tap water was better.   The Year 3/4 children were attracted by the bottle label (a tennis player and green hills), and said it would be purer and good if you were doing sport. It was a startling reminder of how unquestionably young people absorb advertising.

Objectives of the teaching intervention

Using an idea from our local Development Education Centre, we explored the work of Bright Ugochukwu Eke, a Nigerian artist with an interest in the environment. We examined his acid rain project and discussed how we could use his inspiration to represent the global water problem.

Addressing the findings of the bottled/tap water activity, Year 3, 4, 5 and 6 children watched The Story of Stuff video about bottled water (storyofstuff.org) and then discussed it, creating a pros and cons list for bottled and tap water. The class was split into groups and half were asked to make an advert for tap water and the other half a campaign to ban bottled water in the UK. At the end of the session they were asked to reflect on the vote in the audit activity. They all agreed that tap water is better.

The focus of the second session was to explain that access to water varies within countries. Mr K., a teacher visiting from Zambia, led it. We looked again at the pictures of swimming pools and sprinklers in Lusaka that were used in initial audit activity 1. Pupils were next shown a bucket of water and asked what it was for. Mr K. then explained that for many people it was a shower, a sink, and a washing machine and he also explained the way water is collected from communal taps and carried to the homes. The children had a rich discussion with him about the practicalities of accessing water this way. We then looked at some statistics from dropinthebucket.org and Unicef and discussed reasons behind them.

Whilst showing a picture of the sprinkler system outside the parliament building in Lusaka, we discussed whose responsibility it is to address unequal access and what the solutions might be. The children were quick to talk about UK charities they had seen on TV and some mentioned the government.

We finished with a video from TED.com by Ludwick Marishane called A Bath with Water and discussed how, with limited resources, Ludwick found a practical solution. This session was followed up later by a talk from a parent involved in a sustainable building project in Uganda.

Reflecting on the initial audit activities

The children watched Cafod’s videos on water and we discussed what they had learnt. They were then given time to explore everylastdrop.co.uk and research embedded water usage independently. Pupils then reflected on their map 1 from the initial audit activities. I asked them to think how they would change them now.

The year 5/6 class went on to discuss the impact of what they had learnt about embedded water usage. One pupil made the link between importing goods and influencing water usage in other countries. We then talked about ways to save water and minimize our impact, starting with obvious ways and extending to things like not buying disposable fashion.

Increasing awareness of water usage in the school community

We started by watching First World Problem Anthem, a fundraising video about water.

The children were asked about the film’s message and to consider why that format was chosen. It was then explained that they would be making their own video about water. They watched the video we made last year about access to education. We discussed what messages they wanted to convey and how we could work with children in our partner schools to give our video impact.

Pupils worked in groups to brainstorm ideas and then as a class to create a plan. In groups they filmed material focusing on different areas e.g. water wastage, key facts, interviewing pupils and staff, and posing questions for the other school to answer. 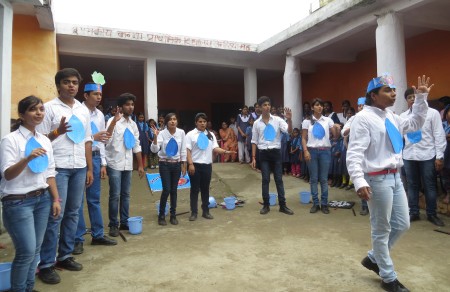 We then skyped with our partner school in India and discussed water usage. They then went on to conduct advocacy activities in the surrounding villages and this and material filmed in Zambia will be combined to make a short video.

Once the main project had concluded, the initial audit activities were revisited after the summer holidays.

Where were these images taken?

The children were shown the same pictures as before and asked to decide where they were taken (UK, India, Zambia or I don’t know). Many of the children could remember where the pictures were taken, and those who couldn’t were less tempted to make assumptions. 90% of the Year 5/6 class got all correct or used their I don’t know card. In Year 3/4, 80% consistently responded correctly.

The children were asked to redraw maps of their water usage. 85% of children included more detail including embedded usage.

We didn’t repeat the ‘Which is better for you?’ activity, as the children had already shown they had internalised the message and parents had reported that their children had been talking about it at home. Pupils were more aware of the need to conserve water and pupils are quick to remind each other when they leave a tap running.

I think a harder challenge is to get this knowledge to impact on their usage in the home, as this is modelled by parents, but once the film is complete, we hope it will prompt further discussions about water usage at home.

Last year was the first year we made a Global Citizenship video, and although the children were keen to participate, much adult guidance was required. However this year they were able to build on that experience and take increasing ownership of the project, which has helped internalise the learning and also develop literacy skills. Having the opportunity to work with the children in Lusaka and Indore also increased their interest in the topic and enabled peer learning.