We are a group of trainee Primary teachers at Reading University, and we worked with a group of Year 4 (8-9-year-old) pupils on issues of peace and conflict and focussed on Eleanor Coerr’s book Sadako and the Thousand Paper Cranes. We wanted pupils to get a sense of the human impact of conflict and simultaneously to further their literacy skills.

Our initial audit activity was very simple: we used a long scroll of white paper on which we wrote the words peace and conflict. We asked pupils to write down words, phrases, events or anything they knew or could think of to do with peace and conflict as a mind map around the words.

We asked pupils to add to the mind map at 3 points within the session: at the beginning, the end, and at any point in the middle they felt they had something to add. We changed the colour of the pen during the lesson, so at each stage, we had a record of when they had written the words.

In their initial writing on the mind map, it was interesting to see that all the boys went to conflict and all the girls went to peace. They only moved to the other word/side of the mind map after encouragement. 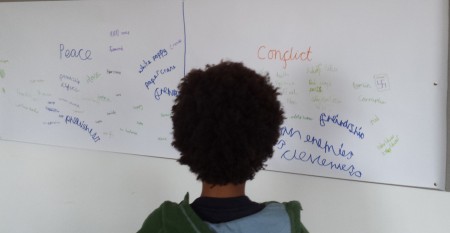 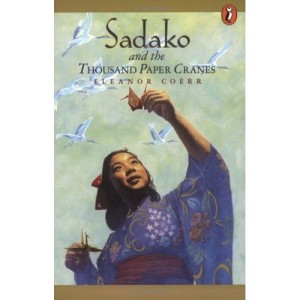 The activity that took place in between was influential on their attitudes and towards peace and conflict. We read the story of Sadako, who developed leukaemia as a result of the bombing of Hiroshima. As she was dying, she began folding 1000 paper cranes, a Japanese legend claiming that whoever does so can make a wish on the 1000th crane. We then taught the pupils how to make origami cranes using scrap paper and we talked about peace and the story as we made them. The children then wrote poetry on slips of paper about peace and conflict, they used the letters of the word as a starting point, but moved on to thinking more broadly. Their poems were written out neatly and decorated by the pupils, and turned into a room-sized mobile, along with the paper cranes.

Through this activity to measure change we saw that the children started out thinking that peace was just the absence of war, but that following the story and discussion, they began to understand that peace is also about people working together and solidarity. This was the outcome we had been hoping for as it was what our main activity was aiming to achieve.

Midway through the work, pupils’ ideas began to focus on conflict on a personal level, rather than solely on war. However they were still exploring the topic of war at the end of the session. This is in line with what we were expecting, as we did not have the time to focus on conflict as well as peace. If we had had more time we would have created an activity to challenge these attitudes. We were surprised at some of the answers, such as Putin, bankers and Elliot Rodger (Elliot Rodger was responsible for a mass shooting in California) We thought these showed how exposed young children are to negative world affairs. 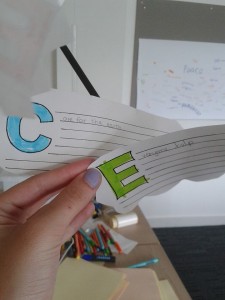 End: bombs, blood, fighting, crises, Syria.
Overall, we believe that the audit activity was highly successful. We were able to measure the changes of attitudes as the children wrote on the sheets throughout the session, meaning that as opinions developed, we were able to note the changes. At the beginning of the session ideas and attitudes were noted in green, in the middle section they were noted in blue and purple and at the end they were noted in orange. It was easy to analyse the responses that we were given as they were noted down; we gained qualitative data which meant we are able to see the immediate responses, although it may have been effective as well to reserve a little time to ask the pupils why they responded as they did.