Ours is a smaller than average primary school in Hampshire. The catchment is mainly white middle class with 8% of pupils minority ethnic and 14% of pupils qualifying for free school meals. The school has been engaged with Fairtrade for some five years and been a Fairtrade School since January 2012.

The school took part in a project funded by the Fairtrade Foundation with the aim of:

Year 1 children worked in a carousel, taking part in five activities, with adult helpers instructed to only repeat the question and not to lead children:

Year 5 pupils did the same activities, and were additionally shown a picture of Jean-Baptiste, a 9 year-old worker on a cocoa plantation, with a brief description of his life and work. They were asked of Jean-Baptiste, his mother, a child buying chocolate and a shopkeeper selling chocolate: How do they feel? 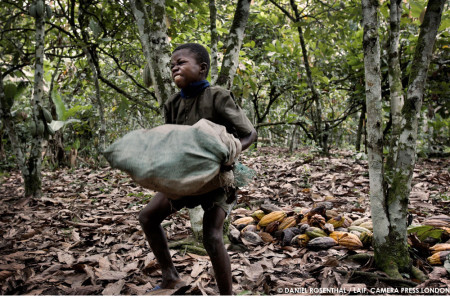 Nine year old Jean Baptiste carrying sacks of cocoa pods weighing approx 30 kg on his father’s plantation on the outskirts of the village Sinikosson, Cote d’Ivoire. He doesn’t attend school; work begins at 8.00am and involves cutting fruit off the trees with a machete and removing the beans. The family has no other source of income. Jean Baptiste has no idea what happens to the beans.

The baseline results were much as expected; the responses the children gave showed a basic and shallow understanding of what they were being asked to consider. When one pupil said something, others just repeated what was said, showing limited thinking.

The baseline was followed by seven one-hour weekly Philosophy for Children (P4C) sessions, with the same Year 1 and 5 classes, facilitated by a worker from our local Development Education Centre in Hampshire.

A number of age-appropriate stimuli were used to facilitate each philosophical enquiry and stimulate discussion around the concepts of fairness, justice, rights, power, slavery, wealth and poverty, equality, exploitation and responsibility. Stimuli included stories and film clips, including Mahmoud’s Film from Save the Children Fund, activities that helped children link what they had eaten that day with different people, an eating meditation, and role-play activities around fairness and unfairness.

The baseline activities were then repeated with each class. Interestingly, the activity on sustainability showed no meaningful change.

For the activity What would you see in a country in Africa? at baseline the main focus was on wildlife; this remained the case with Year 1 children. Representations of people were absent with Year 1 and basic and stereotypical with Year 5. There was one sky-scraper but other built features were basic houses.

This What would make most difference? activity demonstrated the most marked impact of the work, with pupils showing more engagement with the questions at follow-up, (73 responses compared to 32 at baseline), and making more detailed and individual observations

another adaptation of the activity

How do they feel? about child cocoa farmer Jean Baptiste – Year 5 only

After the Fairtrade sessions, children found more similarities and made fewer stereotypical/poverty observations, although the percentage of assumptions remained the same.

When asked for a second time, What do you know about Fairtrade? children in both year groups gave more detailed and informed responses. One child in Year 1 said that she hadn’t realised before that Fairtrade farmers were real.

These audit activities were able to demonstrate the power of P4C as a tool for Global Citizenship. After just seven weekly sessions, the children showed a greater depth of understanding about the topics explored. Instead of just latching onto each other’s answers, they were keen to express their own thinking. The answers they gave were fuller for the follow-up, and some stereotypical assumptions made at first were no longer being expressed.

The most exciting impact was that the children appeared to show more empathy and engagement with people whose lives are different from their own; this was particularly apparent in responses to the photograph of Jean-Baptiste.

We would expect a much greater impact if this work was sustained over a longer period. Unfortunately the teacher who was to take the lead on embedding P4C across the school left soon after completion of this work.

I think Year 1 (age 5-6) pupils found it difficult to engage with deeper thinking, as they still function at a more concrete and simple level. There is value in working with pupils of this age, but it should be sustained over a longer period. The activity using choice cards about sustainability was too hard for this age group, but all the other activities provided useful information.

This was an extremely valuable process I would like to see delivered regularly across the school. In an age where children are largely spoon-fed, using a methodology where children are encouraged to think for themselves, and develop communication skills, is particularly important. For sustained impact and for skills honed during P4C sessions to permeate the learning environment – this would need to be a regular feature in their learning.

If learning involves an increase in empathy and critical thinking, I believe the impact will be much more lasting. Children who have asked questions about what they are learning are much more likely to remember what they have learnt.