Background – who are we?

I have had an interest in Global Citizenship education for over twenty years in my large urban Secondary school in the South of England. The school has approximately 1,800 girls and boys aged 11-19 years; predominantly of white-English ethnicity. I also work with pupils from the Primary partner schools; again these are girls and boys predominantly of white-English ethnicity.

The audit activity has been carried out with two classes: one of Year 7 pupils (aged 11-12) undertaking a design and technology project; the other very briefly with a Year 5 class (age 9-10) who had recently done a study of different types of sustainable energy during another Design and Technology project.

During the Year 7 project, pupils have the brief to design and make a prototype of a land yacht leisure vehicle. The vehicle must be wholly powered using wind energy so its creation has a global footprint significantly lower than that of other leisure vehicles e.g. beach buggies or quad bikes. In addition to this, throughout the project pupils are encouraged to make the most sustainable design choices; this included energy sources and the links between energy and material production. They learned that re-using and re-claiming materials rather than using newly manufactured materials consumed more energy.

During the Year 5 project the pupils had been experimenting with different model vehicles and testing out the energy sources and efficiency of the vehicles. The vehicles were powered using sails and wind; elastic bands; standard batteries and motors; and solar cells (of different sizes and qualities) and motors. There was also variety in the types of motor and how these were arranged: either by a pulley system onto the axle or linked to a large fan. Throughout the project the teacher referred to energy and energy sources and the pupils were encouraged to think about the implications. The Year 5 pupils had less time to carry out the Which Energy For the Future? activity so there was less discussion time. 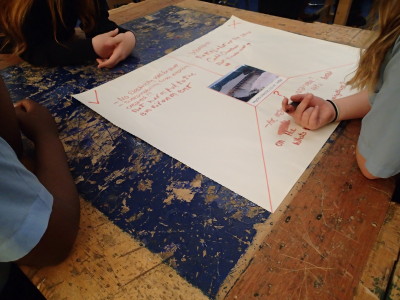 We wanted to find out how well the pupils were able to talk about the different energy sources and what they thought were the good and bad impacts they had on our lives and the environment. We expected the Year 7 pupils to have a deeper understanding and a greater awareness of the implications globally as well as locally. We expected the pupils to know a bit about solar and wind energy as there is a controversial single turbine nearby and some local farmers also have started developing solar farms in their fields. Until 2013, there was a coal and gas-fired power station nearby which was closed and partially demolished; it was a local landmark. There are no other obvious energy sources nearby but we are used to refuelling vehicles, seeing aeroplanes overhead, flicking electrical switches and turning up the gas. Next to most electrical switches in the school are signs reminding us to switch off the lights and other signs elsewhere reminding us not to be wasteful with water or paper. We expected the pupils to know about pollution and landfill.

We used the Which Energy for the Future? activity initially without adaptation, so this involved a photograph of each energy source with an identifying caption that was stuck onto the centre of a piece of flip-chart paper. Around the centre was space for pupils to write their thoughts about the energy source.

The teacher showed a new animated Powerpoint slide to get the pupils thinking about:

After this class discussion the pupils gave up their brown pens and were given green ones and they then rotated again. The pupils had three or four minutes to carry out the final audit in which they used the green pen to jot down more questions or even answers; they could add more pros or cons and if they thought the brown comments were in the wrong place they could move them to the correct place and explain why they’d moved them. This stage again was explained to the pupils using an animated slide.

Finally, a straw poll was carried out to find out which power source would be favoured if we were going to get a new one in our town.

We were impressed to find out that the Year 7 pupils knew about all of the energy sources and they had views about them all. Some groups knew more than others so the rotations were particularly useful in revealing the initial knowledge and viewpoints and also getting the pupils to think about a large range of energy sources. The Year 5 pupils did not reveal so much, partly because they had less time so they were only rotated twice before the activity in-between audits and in the first instance they knew very little about energy sources other than wind, hydro-electric power and solar. Many of the younger group were more concerned with the aesthetics of the power plants talking about them looking dull, an eyesore or not very interesting. They also commented that some structures looked unstable. We felt they were searching for things to say.

When following this up as an audit activity in the future we will ensure not to rush through the process and allow more time between start and finish, perhaps to include time for independent research is it was fruitful hearing the pupil voice especially in relation to raising controversial issues and the meaningful ways they expressed their view and knowledge.

The pupils thoroughly enjoyed the activity between audits as they shared what they already knew and how they knew it. For example both Year 5 and Year 7 pupils knew about the earthquake and tsunami in 2011 that led to the nuclear disaster at Fukushima. Some Year 7 pupils knew about controversial issues relating to fracking although no Year 5 pupils had even heard of fracking. Some Year 7 pupils knew about getting energy from crop such as sugar cane and oil seed rape; others linked this to all McDonald’s fuelling their delivery lorries with used oil from their deep-fat fryers. We were glad that Year 7 pupils thought about the implications of hydro-electric power on families who lived or worked on the rivers affected e.g. people who use boats or people who fish but nobody mention the flooding implications. Deforestation was talked about in discussing some energy sources such as hydro-electric and mining (on-shore oil) and pupils discussed the negative environmental impacts of off-shore oil on sea life although no one mentioned oil slicks (the work was carried out during the week that the BP Deepwater Horizon oil spill was in the news again).

The straw poll results were interesting. The pupils were not concerned with the storage of waste nuclear materials and since we are in no danger from earthquakes and tidal waves, there was little concern with nuclear power being an energy source for the future. On the whole they favoured renewable energy sources like solar and wind. The greatest surprise was that sugar cane production was so popular. On further questioning one pupil seemed to think it was a great idea in Britain as we’re not short of food as we can spare the land whereas he thought the fields in Brazil should be used for crops as there were so many hungry people there.

The most important thing we learned was that the activity is extremely useful in helping pupils think about different energy sources and express their views on the implications. This was especially true for the Year 7 pupils. The Year 5 pupils had less time to shine but we felt that even given more time the results would have lacked depth and been less revealing than that of the Year 7 group; so we conclude the activity is not suitable for pupils younger than 9 or 10.