The activity Why are people poor? was trialled with multiple groups of Year 8 pupils (age 12-13) at our large Language Specialism secondary school. The school uses CLIL, a Content and Language Integrated Learning approach, which ensures that languages are taught through other curriculum subjects as well, making the language relevant and relational. CLIL encourages language learning to improve pupils interpersonal skills and cultural understanding. 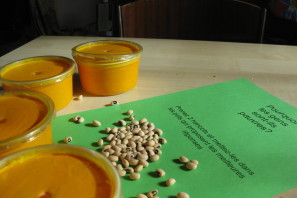 This suburban Secondary school was doing a piece of work around Fair Trade and were interested to trial activities that would measure pupils understanding of Fair Trade and of wider issues around poverty and taking action. In keeping with their language learning ethos, the activities and the subsequent Fair Trade project were all delivered in French.

Once pupils had responded in French, we allowed them to respond in English as well, to ensure that any limited vocabulary wouldn’t prevent them from fully expressing their attitudes and ideas.

It is clear that pupils have a strong understanding of injustice as a cause of poverty. They cite corruption, unfair political processes, access to education, racism and low prices for crop exports. They also listed many other reasons that weren’t included in the activity, showing a willingness to think beyond the simplistic answers provided for them. Whilst there is obviously some impact on pupils from media stereotypes about benefits claimants in the UK, the responses show compassion and empathy and a broad idea of poverty. It is interesting to note that almost all pupils have assumed that the activity is referring to poverty in Africa, despite the fact that this continent wasn’t mentioned at any time. This may be due to the fact that they knew they were embarking on a project about Fairtrade that would look at products from Africa, but it tells more of the general image of Africa as a place of poverty and little else.

Exploring Fairtrade is a great way to help pupils understand the inequalities in the world trade system as it currently stands, and also to encourage pupils to see connections between their own lives and the lives of others. Making campaign posters, raising awareness and auditing Fair Trade products in the school are all ways that young people can take action without having to spend money, or influence parents’ decisions on products that they buy.