Ours is a church school in a fairly affluent area in Southern England. Pupils have a generally stereotypical view of the world, unintentionally reinforced by charity appeals, some curriculum studies, and news broadcasts. For example pupils completed the What would you see in a country in Africa? activity and there was a high incidence of stereotypical or negative answers. It was felt they would benefit from a series of activities to broaden their horizons. 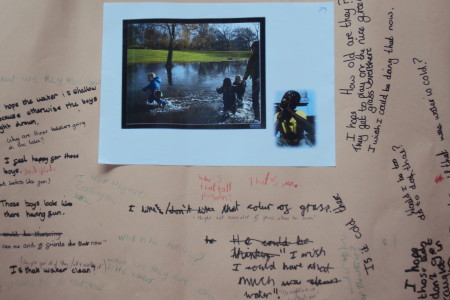 We classified the responses for each picture into three categories based on the nature of the comments: empathy, concern and stereotype. The audit showed that some of the children made a definite distinction between the black and the white child when viewing the pictures. They assumed that the black child would not be familiar with green grass, his access to water might be limited and he might think that water posed hidden dangers, whereas they assumed the white child thought more of the fun aspect, but thought both had a desire to join in.

In response to these findings we carried out several intervention tasks. We instituted Tuesday Newsday, where pupils saw items of world news, discussed them and pinpointed relevant locations on a map. We used this activity to facilitate philosophical enquiry.

Pupils also saw and discussed pictures of locations that you could find in most countries (cities, slums, shops, open areas). Children who participated in these activities showed an increased awareness of what was around them, asked more probing questions and stopped accepting things as ‘fact’ without questioning the sources of information. It was found that the Philosophy for Children methodology enabled more critical thinking, more respect for the views of others, and a deeper understanding of how others think and feel.

The activity was repeated after several months and the interventions mentioned. We observed a decrease in the number of responses, from 153 to 121. The lower number of responses in the repeat activity could be due to a more considered approach by the children, with the replies being less obvious and more thoughtful.

As with all such research, more questions were raised than answered and there are obviously other influential factors, such as current news stories and topics covered in school.

After the first audit children watched Ragdoll Foundation’s Mahmoud’s Film. They then formulated questions that they might ask Mahmoud if they met him. These were placed in a conspicuous position. The children then paired off, with one child taking the role of Mahmoud and the other talking to him. These conversations were filmed, to be transcribed and audited later. The children then swapped roles and the process was repeated. Questions from the displayed list were discounted as far as empathy issues were concerned; only those that were original were included in the audit.

During the activity it was obvious that all the children were completely absorbed in the task and taking it seriously, asking and answering questions to the best of their ability. Some children found the exercise completely outside their experience and were unable to formulate or answer questions meaningfully. The ability to empathise and put themselves in someone else’s shoes was difficult and raised its own questions about the maturity necessary for the task and the work done to raise this awareness.

This activity is able to elicit feelings of empathy and critical thinking and to highlight stereotyping, but there were problems with actually catching the responses. Hand-held video cameras were used to record the conversations, but could not be everywhere and, occasionally, may have influenced the responses as the children saw the cameras approach.