We decided to adjust the activity by using pictures of gardens to explore children’s perceptions of Kenya.

Our school is an average-sized Primary school with pupils from a variety of backgrounds. My Year 2 class (age 6–7) had started the summer term by looking at homes throughout history and, led by the pupils, we had moved on to look at gardens throughout history. One of our previous teachers had recently moved to Kenya, so this was an ideal opportunity to look at homes and gardens in an African country.

As an introduction we looked at a map of the world, locating England, Australia (the focus of last term’s geography and art) and then the continent of Africa. Using Oxfam’s Mapping Our World online activities we explored the relative size of Africa. Most pupils had thought Africa was a country, so we spent some time discussing the differences between a continent and a country.

After explaining that we were going to look at Kenya and locating it on a map, I showed the class some photographs of gardens. In small groups pupils were asked to discuss which gardens were located in Kenya and which gardens they thought were in this country. I used pictures that were all depicting gardens in Kenya. 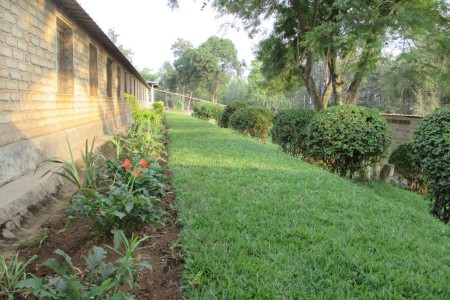 Pupils engaged actively in discussion, deciding which garden belonged where, and they were encouraged to justify their decisions. Many thought that the poor looking gardens were in Kenya and the lush, green and fancy gardens were in the UK. A few pupils felt that some of the gardens looked like they were in a hot country. The pupils were quite surprised to learn they were all in Kenya.

The same images were then used as a stimulus for exploring and discussing what similarities the Kenyan gardens had with pupils’ own gardens. They all live in homes with access to a garden. One of the things I try to remember while teaching global topics is focusing on things that are the same rather than highlighting differences. The pupils, again working in small groups, gathered similarities between the gardens and fed back to the rest of the class. The class talked about these similarities in a very positive way and came up with some interesting ideas, from the obvious The gardens have flowers in to the inference: They will probably need a watering can to water the plants like we water our class plants.

The lesson finished with a reflection time. I asked the pupils to think about whether their first ideas about what a Kenyan garden looked like had changed. Every child said that their initial ideas had changed. During this reflection time, we discussed how it is important that we celebrate the fact that we are all different, but that it is also essential that we understand how we share similarities – with children in our class and our school, and also with people who live in Kenya. Pupils approached the topic and participated in the discussion in a mature and reflective way.

This activity was an introduction to our Kenya topic. Further sessions included looking at the types of food grown in Kenya on a small scale, reflecting on the work we had done on allotments here in the UK, and on a larger scale. We used Kenya as an example when talking about fair trade for the first time. The work on fair trade primarily included playing lots of games, as suggested by the Fairtrade Schools website and allowing for lots of discussing and questioning.

This learning activity was more about an approach rather than an add-on to the curriculum and that’s how I see global learning. We want our children to have an awareness of other cultures and diversity and develop as responsible global citizens.