I trialled this activity at our suburban Primary school of 450 pupils in the Czech Republic where I have taught for ten years. We focus primarily on ecological education; the school has its own science trail.

I trialled it with a Year 7 (age 12-13) mixed ability science class. There are 23 pupils (nine boys and 14 girls). In Years 4 and 5 their teacher worked with them on global development; they sewed dolls for UNICEF and visited a home for the elderly. The pupils have a basic understanding of concepts like Fair Trade, organic products and ecological agriculture.

I had little experience of verifying pupils’ attitudes and evaluating the effects of teaching global topics in this class, although we had learned about work on banana plantations and a range of fair alternatives.

I chose the activity Which Tomatoes Would you Buy? and did not make any modifications to the activity. The goal was to show pupils that when they shop, they not only influence their health, but could also be supporting non-environmentally sound business operations, when they shop. Before the initial audit I wondered if pupils would be willing to share information about their shopping habits. I expected them to be able to find pros and cons of the individual products, but was unsure that they would want to talk about the reasons for their choices: if price was a consideration, they may not have wanted classmates to know this. I was certain that some would remember Fairtrade products.

I showed pupils some cherry tomatoes and asked them where they were from. Some pupils presumed they were from a supermarket; others suggested from abroad, farmers’ market, or a greenhouse. Based on their answers, the pupils were divided into four groups. Each group got a worksheet and was asked to choose from a list the tomato they felt they most wanted to buy. If a group could not come to a consensus, each pupil was to list their individual choices and the reasoning. If a consensus was reached, each group had to give reasons why they chose the specific tomato.

We put the choices of each of the groups and individuals in the table on the board. Tomatoes grown on a balcony were by far the most popular (four pupils), followed by tomatoes from a farmers’ market. The reasons most pupils gave for choosing the balcony tomatoes were the price, quality (home grown, so they must be good), the argument I know what I’m eating (no pesticides), and their taste. With the farmer’s tomatoes, the children emphasized quality and the fact that they are natural, also mentioning the higher price. Some said that the disadvantage of balcony tomatoes was that you have to take care of them. With the other types of tomatoes, pupils had a problem with their price, the fact that they could have been treated with pesticide, or that they are not fresh (need to be transported). Other criteria like packaging, nutritional value, transportation from grower to shop (or our table) were not taken into consideration. Pupils did not consider these as possible criteria in their decision-making process. 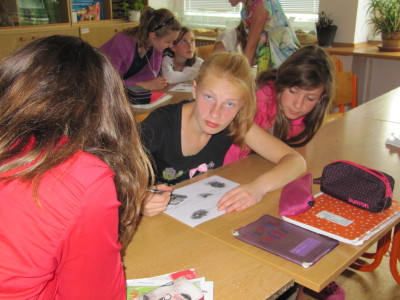 At the end of the audit we discussed who shops for groceries at home, and how, and what they base their decisions on. The discussion revealed that the children rarely do the shopping: it is usually the parents who shop, most often in supermarkets, much more infrequently in health food stores or at farmers’ markets. Some got produce from relatives’ or friends’ gardens.

Overall pupils chose products that are environmentally friendly and that are grown in their vicinity. But their choices essentially depended on taste and quality of the product.

I noted the responses and reasons the pupils gave for why they chose the specific types of tomatoes on the first sheet. In order to be able to follow the pupils’ opinions and any alteration in these, I had to specify which criteria they took into consideration when making their decision. This is why the second note sheet shows which criteria the pupils used most often.

The results show that pupils were thinking ecologically, choosing tomatoes that were most environmentally friendly. No group selected tomatoes from the supermarket as their first choice. They took two criteria into consideration: how good the tomatoes were for our health, and their price. None thought about the distance the products travel or the amount of packaging material. They also did not think about the effect on the environment of growing the tomatoes, but only on us as consumers (health, and then quality and money). Nobody mentioned Fair Trade products.

Nobody chose anything but the balcony tomatoes or ones from the farmers’ market. The reality, though, is different. The pupils do not take part in the shopping process, and for most parents the deciding factors are price and appearance. Most pupils admitted that the tomatoes bought in their household are from regular production (supermarkets, different packaging) and that the price is an important criterion. If the difference in price is too big, the cheaper product wins. Only a small number give precedence to more expensive, but healthier and more environmentally friendly products.

An advantage of this activity is that shopping as a topic is close to the children’s reality. In the future, I would include more products in this activity, so that pupils thought more about the shopping process.

I did not have a teaching intervention and have not yet done a final audit. Had I done this I would have emphasized other factors for pupils to consider in their shopping: the amount of packaging, the distance produce travels and the effect that growing produce has on the environment. I would introduce the eco footprint concept and look at how to calculate it for a family. I would set assignments aiming to track the tomatoes on offer in different seasons, or to find out which of the tomato growing countries is the farthest from the Czech Republic.

During a final audit pupils could perhaps consider things in a wider context, follow up on information about other products and select products based on how (given their manufacturing, transport and packaging) they influence the environment.

Note sheet for teacher no. 1 – number of votes

Note sheet for teacher no. 2