The Performing Arts Department at Reading College has 55 learners with ages ranging from 16 to 27 studying BTEC (Business and Technology Education Council) levels 2 & 3 (equivalents to GCSE and A-levels). The course has a vocational focus; embedding in it Global Citizenship, and providing opportunities to discuss relevant moral, social or political values, only serves to enhance this. I was interested in the impact of this work on students’ awareness of how they might take action, globally and locally. I conceived a project called The Control Room, which would combine theoretical and practical exploration of the growing Haunt Industry with work around human rights, culminating in a public performance. This was a large multi-discipline project, bringing together over 60 students from different departments to create the production.

The Control Room is a live action maze where the audience walks through a series of rooms, immersed in the story, sound and atmosphere. These theatrical experiences have become increasingly fashionable over the last 10 years and vary in artistic integrity from horror entertainment to more sophisticated explorations of ideas.

What did I want to find out?

I was interested in looking at how empowered my students were to take action against human rights abuses and so carried out an audit at the beginning and at the end of the project to measure the impact. Previous experience told me this age group tends to have a very strong sense of justice but are not often engaged in political or campaign work, feel disconnected from decision makers and find it hard to see performance as a means of bringing about change in the world.

I began by asking How can I make the world a better place? and Whose responsibility is it to uphold people’s human rights? and noting down all the various suggestions. These questions were separated by two weeks to minimize their influence on each other.

Student responses to the question ‘Whose responsibility is it to uphold people’s human rights? ‘ demonstrated a real lack of awareness of the possibility of taking action personally.

I grouped the students’ responses into five categories:

The activity was designed to give me an idea of student awareness of human rights around the world: whether they assumed that human rights abuses only took place in other countries; and where they thought the power to deal with these issues lay. Their responses demonstrate that they saw them on a national scale, but do not indicate whether they assume these issues are common to all countries, or just a problem in countries within Africa and Asia.

Not one of the 25 students mentioned themselves. A few used the word everyone or yours, but none said it is my responsibility. This was also reflected in their responses to the question How can I make the world a better place? where they focused on generic, indirect activities, and mentioned neither things they already did nor things they could do. From general discussion following the activities, it became clear that no student took part in any activities around human rights.

We then looked at examples of human rights abuses, in particular at prisoners of conscience around the world, including the UK. We explored the stories of Burmese Aung San Suu Kyi, Amira Osman from Sudan, British Guantanamo prisoners Rhuhel Ahmed, Asif Iqbal and Shafiq Rasul, and British journalist Sally Murer. The students expressed surprise at these things taking place so close to home, and immediately asked what could be done.

We then explored specific examples of action: the campaigns of the West Papua Independence movement; the Palestinian Solidarity Campaign; and Free the Arctic 30 (the campaign to release Greenpeace activists from detention in Russia). We also investigated other campaigns like #everydaysexism and movements against homophobia in Uganda and Russia (e.g. Pussy Riot campaigns). We looked specifically at the work of Amnesty International.

Planning a piece of immersive theatre

We then began working on an immersive theatre piece, the text, imagery and narrative of which would be generated by the students themselves. It took the form of a prison, which audiences entered in small groups. We built this within the drama studio, using three large wooden rooms, and short corridors between them to guide the audience. We discussed how we could create an atmosphere of oppression: the maze became very dark and very loud. Spectators first encountered prison guards who spoke to them threateningly, accusing them of taking part in unlawful protest and of sending state secrets abroad.

One member of each audience group was a plant, who had her personal belongings (phone, bag, wallet and ID card) confiscated. She was made to put on a boiler suit and led away by the guards. The audience then entered the prison maze, in each room encountering a prisoner who tells his/her story (these were taken from real life scenarios documented by Amnesty International). The students were particularly aware of recent news coverage of e.g. the protests against homophobic law changes in Russia, the impact of solitary confinement on prisoner mental health, and the trafficking of adults and children. The stories raised these issues in a powerful but sensitive way. 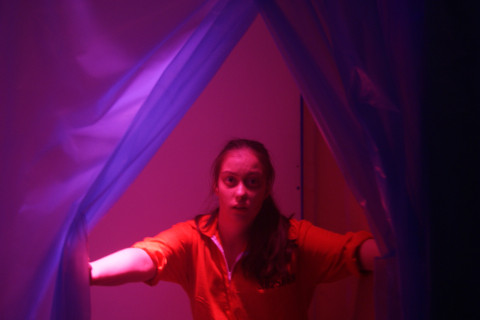 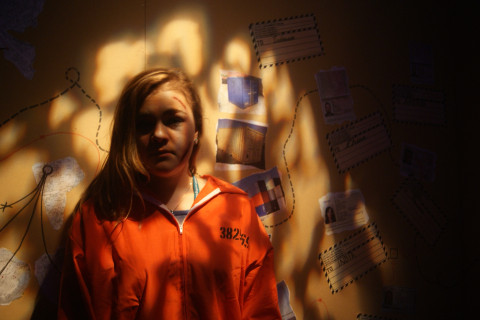 Each prisoner in the maze begged spectators to remember their name; the audience had to search the room to find it, written underneath a box, or on the back of a door. At the end of the maze, spectators have to take a megaphone and shout out the names of the prisoners in order to be able to leave. On leaving the maze, the audience went away with information about Amnesty International encouraging them to use their own name to make a difference. It was an extremely frightening and disturbing theatre piece that left audiences visibly shaken, but also strongly motivated not to let prisoners of conscience be invisible, and to use the power of petition and campaigns and letter writing to try to make them seen.

Feedback from teaching colleagues was unexpectedly useful in gauging impact. One Hair and Beauty student had found the experience very upsetting, explaining to her classmates that what bothered her was that the stories were real. She had had no idea that these things happened. This had generated an impromptu discussion class discussion about human rights and Amnesty’s work around the world. These issues had never come up on the Hair and Beauty course. The impact on the students who wrote and performed the piece was most impressive; this is where I was best able to measure impact quantitatively.

I repeated the question ‘whose responsibility is it to uphold people’s human rights?’ in the week following the final performance of the piece. Students wrote individually. These are some of their responses.

The response was unanimous. All 25 students expressed a personal desire to take action against human abuses. I was very careful not to feed them this answer at any point during the project, nor to say ‘it is all of our responsibility’ – I did not want to impose a change of mindset.

I believe that this change of attitude was created by a very powerful combination of experiences. The researching and devising process provided students with real-life examples of oppression occurring right now, which opened their minds to the scale and topicality of these issues. The visceral experience of performing in the maze, with the noise, oppressive atmosphere and spectators’ voices desperately shouting out the names of our characters through a megaphone in order for them not to be forgotten was extremely powerful. The audience had to take personal responsibility in order to find a way out.

It was a powerful piece of work, and brought about real attitudinal change. It would be good to explore what actions students took in their personal lives – whether they were more likely to take action for social justice over a longer period of time. With more time, I would continue to measure this willingness to take action, using a variety of audit activities.