Ours is one of the largest Primary schools in the country. It has a culturally and socially diverse population; most pupils learn English as an additional language, and some forty languages are spoken across the school. Our International Co-ordinator manages the international school link with a Primary school in western Kenya.

We have been devising and trialling activities with support from our local Development Education Centre and other teachers, with a focus on activities that can be used with international partner schools, particularly in the Global South, as part of their assessment of international projects.

The first resource used was Thinking Together About Food and both schools did the baseline assessment asking Why are people hungry? They shared some of their findings via Skype. In Kenya, the pupils considered the question with reference to their local and their national environment – how Kenyan people locally and nationally might be hungry, and why. In the UK, pupils talked about hunger as it relates to poverty and in an exclusively African context – hunger over there and not anywhere other than the continent of Africa. So from the outset there were differences in the children’s thinking. 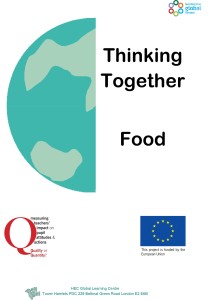 The suggested activities for Numeracy and Literacy (Maths and English in Kenya) were undertaken as described in the Thinking Together About Food resource i.e. The Journey of a Banana and The Zero Hunger Challenge. In the Journey of a Banana, both Kenyan and UK pupils assumed the grower would receive the largest cut of the money and the retailer the least, presuming that the people who had planted, grown and cultivated the crop would receive most of the money. The UK pupils subsequently informed the Kenyan pupils of the UK supermarket price of Kenyan-grown green beans (around £2). The Kenyan pupils were astonished and quite angry that despite the high price of beans in the UK, their local farmers received only a tiny proportion of this amount.

Final audit and reflection on the whole process

The final audits were slightly modified to allow pupils to add to reasons for hunger in their own words.

UK teachers and pupils were moved by additional answers provided by the Kenyan pupils who gave their own reasons from very personal perspectives. Some shared first-hand how poverty and devastating illness resulted in hunger for some Kenyan people. Some explained that the HIV/AIDS epidemic had resulted in many children becoming orphaned, some of whom were educated at their school and knew hunger at first hand. These answers, reported by staff to be made in a very matter-of-fact way in a Kenyan context, raised unexpected and highly sensitive issues that continue to be addressed within the partnership work.

At our school, children are introduced to new learning themes through hooks: big ideas that get them thinking about their new learning. In Year 4 their hook was Learning About Kenya and this activity was part of their learning. Some other teachers were surprised at the enthusiasm displayed by their pupils and in particular how they discussed the issues at home. Parents reported pupils pointing out Fairtrade items in supermarkets and teaching them about food from a Kenyan perspective. Children also wanted an assembly to focus on issues of hunger and inform the rest of the school. They became more switched on to global matters and often came into school discussing what they had seen on Newsround.

Both schools analysed the results in detail, which was considered time- consuming. Rather than establish percentages, teachers could simply note the two most significant answers or focus on the key statements mentioned in the resource. For teachers using the resource, they suggest:

For older students, a reference to unfair global trading rules and import-export controls on a macro level might be an additional reason for why people are hungry. Kenyan children were highly aware of injustices they saw around them regarding the effect of tribalism or clanism on the fair distribution of food.

Assumptions made with regards to the initial query Why are people hungry? could be avoided (if required) by a reformulation such as: Some people are hungry in many countries in the world, including our country. Why are (these) people hungry?

A pulling together, Harambee spirit means that the education of children orphaned by the AIDS epidemic is paid for by other families. This is seen as a moral, community-spirited obligation. The Harambee spirit pervading our partner school also meant that extreme wealth and waste is challenged by its pupils, especially when they see western celebrities spending large amounts. They were dismayed that this community obligation to support those who are hungry is not universal. They were also angry that international laws make accessing UK and western markets difficult or impossible and result in food waste (e.g. beans that were not uniform in size may be rejected by foreign markets). These were the issues shared in this valuable exercise involving partnership schools.